A user from SE Meta recommended that we "feature" posts from our Meta that need more general user visibility and possibly draw more users into Meta.

As a BTW, looking at the edit history of Why don't members like our questions and answers?, it seems like the featured tag expires automatically.

For the post in question the featured tag was added Aug 3 and by Sept 9 it was deleted, by Community. This post, When and why is the [featured] tag removed by the Community user?, states that they are removed after 30 (or so) days:

if we did not, every meta would be littered with dozens of forgotten "featured" questions over time.

Also, I can't seem to get it to work, I've just featured the On-topic meta question, but it doesn't seem to show up anywhere in a "Featured" box. Neither on 3D printing meta nor the main 3D printing site.

It seems as if there is a little delay, at most 5-6 hours (I've tested it), between adding the featured flag and it appearing in a box: 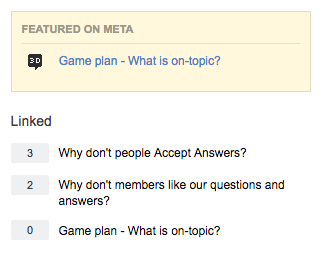 It also appears to hang around in the box for another 12- 14 hours after the tag has been removed.

Not the answer you're looking for? Browse other questions tagged discussion .

Welcome!
This site is for discussion about 3D Printing Stack Exchange. You must have an account there to participate.
Help

7
Game plan - What is on-topic?
6
Why don't people Accept Answers?
5
Why don't members like our questions and answers?

17
Vote early, Vote often
3
Accepting Unanswered Questions
3
How do we motivate users to vote and advertise the voting policy?
9
3D Printing SE Beta Status
6
Why don't people Accept Answers?
5
Do we have Standardised Comments?
7
Can we get MathJax enabled?
4
Encouraging more answers per question